The Untold Story of Breakfast 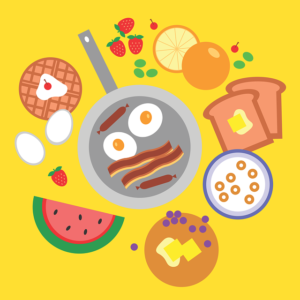 You’ve often heard that breakfast is the most important meal of the day, but did you know that it’s radically changed throughout history?

You’ve often heard that breakfast is the most important meal of the day, but did you know that it’s radically changed throughout history? What we now constitute as breakfast food is entirely different from what was served even 100 years ago. As our palettes, time, and the availability of fresh groceries have changed so too has our concept of breakfast.

While coffee was a popular beverage for many outside of Europe for ages, it took the Europeans a little longer to catch on. Instead, many drank beer for breakfast because water was unsafe to drink. During the industrial revolution, coffee began to gain popularity because its stimulating effects helped get workers ready for a long day.

Did you know that one of mankind’s earliest meals was the pancake? While early pancakes would have been made out of slightly different materials, humans have been eating them since prehistoric times. In fact, the oldest naturally preserved mummy, Otzi the Iceman, is believed to have had wheat pancakes as his last meal.

Having A Party? Try Waffles

When a bumper crop of Florida oranges hit the market at the same time as a worldwide outbreak of influenza the need for increased vitamin and mineral intake lead to OJ’s shining moment. Vitamin C rich orange juice found its way to breakfast tables around the country, and we’ve relied on it ever since.

Categories: Restaurant | Tags: breakfast and restaurant
This entry was posted on Friday, April 12th, 2019 at 1:57 pm. Both comments and pings are currently closed.