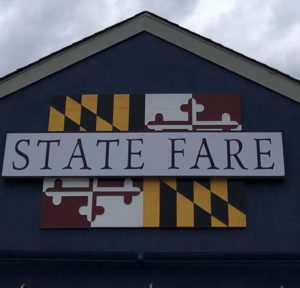 Is it a coincidence our building is purple? State Fare is the best place in Baltimore County to be a Ravens fan.

Located in the heart of Catonsville, State Fare is one of the biggest centers for Ravens fans in Baltimore County. If you want to watch our team win big, there’s no better place than our bar and restaurant, which features countless drink options, hearty, satisfying food, and an equally enthusiastic set of Ravens fans to watch every play go down alongside you. The Super Bowl is set to happen on February 2nd, so there are potentially only two games left to cheer on the Ravens before the Big Day. There’s no better place to be than with your fellow Ravens fans at State Fare; read on to learn all you can find at your local Catonsville sports bar.

Watch on the State Fare Patio this Saturday

The next Ravens game is airing this Saturday, January 11th, at 8:15 pm. Somehow, even though it’s January, we are set to have warm weather through the weekend, so we’re opening up the State Fare patio! You can enjoy watching the game outside next to our toasty fire pits, and on our 114-inch projector screen. You probably can’t get that experience at home!

Only Two More Games to Go

There are potentially two more playoff games to go in the season. This Saturday, the 11th, sees the Ravens going up against the Tennessee Titans who just beat last year’s Super Bowl winner, the New England Patriots. This match should make for an exciting game, and there’s no better way to enjoy a thrilling football game than alongside a crowd of fellow fans. Next, Championship Sunday comes on January 19th, which will determine which two teams get to face off at the Super Bowl. You won’t want to miss the excitement by watching these games at home.

State Fare is full of die-hard Ravens fans. Whether we’re hosting past Ravens Super Bowl champions, or cheering on our team week by week, we sport purple every weekend of football season. We’re open until 2 am each night, so no matter when the games start or end, we will be here. Our restaurant and bar menu is versatile enough, with vegetarian, vegan, and gluten-free options, and wine, beer, and cocktails that any Ravens fan can come to State Fare and find a meal and drink they can savor while cheering on the Ravens. Why would you want to be anywhere else during football season?