An Introduction to Chicken and Waffles 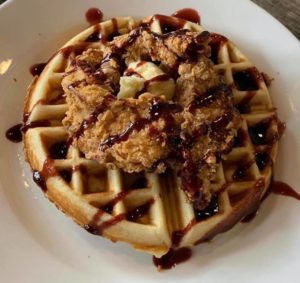 Learn about the delicious everyday dish chicken and waffles, then try ours at State Fare!

The Birth of Fried Chicken

The earliest form of fried chicken was called fricassee, which consisted of fried chicken pieces braised in sauce. Fricassee was popular during the medieval period and required an iron pot, meat, and fat.

A popular American colonial cookbook, The Art of Cookery, by Hannah Glasse, featured a recipe for “Brown Fricasey.” This recipe instructed the chef to coat chicken pieces with egg, then spiced breadcrumbs, then fry them in butter.

In 1881, African American cook Abby Fisher wrote a recipe for fried chicken in her book What Mrs. Fisher Knows About Old Southern Cooking. This recipe involved flour, fat, and a thin gravy finishing.

During the Civil War, soldiers were sent fried chicken in their care packages. Why? Because the frying process made it harder for the meat to spoil so that it could survive the long journey.

The Evolution of Waffles

Waffles originated as far back as the Middle Ages, emerging from the communion wafers produced by bakeries for church.

The third president of the United States and a one-time ambassador to France brought back a French waffle iron to the United States in the 1790s. This started a mini-waffle craze as the trendy kitchen tool spread in popularity.

Chicken and Waffles, Together At Last

A version of chicken and waffles appears in Pennsylvania Dutch country during the 17th century. At this time, pulled chicken and gravy topped the waffles.

Chicken and Waffles At Wells

A different version of the chicken and waffles combo appeared in 1938 in Harlem, New York. The Wells Supper Club, or “Wells,” was a hotspot for late-night musicians who showed up to eat after dinner but before breakfast. This dish was a tasty compromise.

As the combo became more popular, it made its way to Los Angeles with the help of Harlem native Herb Hudson. Hudson opened an entire restaurant devoted to the dish in 1975, named Roscoe’s House of Chicken and Waffles.