The Taste of Beer: Cans vs. Bottles 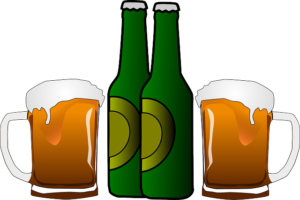 In the old days, bottled beer was marketed as being the more elegant, upscale version of commercially-sold bubbly as compared to the kind that came in cans.

In the old days, bottled beer was marketed as being the more elegant, upscale version of commercially-sold bubbly as compared to the kind that came in cans. That simply isn’t true anymore, but old impressions tend to die hard. Do you prefer the taste of your beer in a can or in a glass bottle? Here at State Fare, you can find both, so come on down and try out some new flavors you’ve never experienced before!

Unlike bottles, cans provide better protection against light. While you ordinarily wouldn’t think this is a problem, sunlight is something that shouldn’t touch freshly-brewed beer. Whenever light touches the beer, it starts the oxidation process. If this sounds unpleasant to you, it’s understandable. This is when the beer starts to skunk or go bad. Surprisingly, brown beer bottles do a better job of deflecting light than green bottles or clear bottles. Still, the light can’t pass through the aluminum.

Whenever the seal on something is broken, it’s usually a bad sign. This isn’t any different when it comes to your favorite brand of beer. The seal protects the beverage inside, especially when it sits for several months instead of being consumed right away over the next few days or weeks. The double seal technique is what gives the can its magic.

The technology behind canning has improved since the old days when cans weren’t as high-quality. In the last ten years or so, the tech has improved enough that cans can keep out more oxygen than bottles are able to, and that can affect the quality of the flavor.

BPA is something that many consumers are becoming increasingly aware of and concerned about; many plastic containers claim to be BPA-free. New can liners without BPA in them are becoming commonplace no matter what brand you are loyal to these days.

For the longest time, many people claimed to dislike drinking beer out of a can because of that weird metallic taste. The aluminum actually has nothing to do with it – it’s a problem during the brewing phasing, not the packaging process.

Categories: Bar | Tags: bar and beer
This entry was posted on Friday, October 11th, 2019 at 3:42 pm. Both comments and pings are currently closed.