Scotch, Whiskey, and Bourbon: What are the Differences? 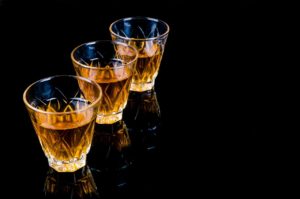 Scotch, Bourbon, and Whiskey – to the untrained professional they might all seem fairly similar, but the truth is their differences are quite dramatic and technical.

Scotch, Bourbon, and Whiskey – to the untrained professional they might all seem fairly similar, but the truth is their differences are quite dramatic and technical. The three alcohols have been made for an incredibly long time and the processes and restrictions that make each unique are upheld by regulating bodies. To help you get a better understanding of the differences before you order your next drink at State Fare, today we’ll be walking you through some of the basics.

There are many different types of whiskey, and different countries have their own tricks and standards, but each variety starts in the same place. Using a fermented grain mash made of barley, corn, rye or wheat, whiskey is a distilled alcohol that is aged in a wooden cask – often of charred white oak. While it’s hard to trace the true historic start of whiskey, the written record shows it most likely started in Italy – where alcohol was distilled from wine – before being adapted by monks and more in Scotland.

Of the three terms Scotch whiskey, shortened to Skotch, is the most succinct to define. Scotch is a type of whiskey made in Scotland to a set of highly specific rules. Scotch must be distilled twice, although some makers distill them anywhere from three to twenty times, and the final distilling must be aged in a cask for at least three years. There are five regions that make Scotch, each producing a different taste and style. These regions include Lowland, Highland, Campbeltown, Speyside, and Islay.

If whiskey is to become a bourbon it needs to jump through a few more hoops according to The Federal Standards Of Identity. The distinction starts with the types of grains used – which must be at least 51% corn with the rest being rye, wheat, or malted barley. Next, the mash is distilled at 160 proof and then reduced to 125 proof before it heads into the barrel. Bourbon must be aged in a new barrel, often of charred oak.

Categories: Bar | Tags: bar and scotch
This entry was posted on Friday, October 4th, 2019 at 4:39 pm. Both comments and pings are currently closed.