The History of Cocktails: Separating Fact from Fiction 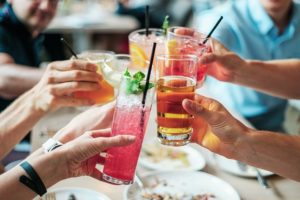 Today, pretty much everyone knows that a cocktail is some kind of liquor mixed with juice or other ingredients, but it wasn’t always common knowledge.

From happy hours to pop culture references, the word cocktail has become ubiquitous for meaning an alcoholic beverage composed of a few parts. But when did the term “cocktail” first come into common use?

The first known use of the term cocktail can be traced back to a British newspaper article in 1798, but it only gained popularity in 1806. The term was fully defined in The Balance and Columbian Repository as a stimulating drink that uses a mix of sugar, water, and bitters. This was also occasionally referred to as a bittered sling, another term for what was an early form of a cocktail. If you’ve ever been curious about the start of cocktails, you may have heard a few of the more fictitious origins. Among which include a tale that puts the origin of cocktails in New Orleans, where the term derived from a French word for a serving glass called a “coquetel.” Other origins include stories of using a cola de gallo, or cock’s tail, to stir drinks in Mexico. While it’s more than possible that the term arose in different places at the same time, the most documented origin is, in fact, the one from The Balance.

While the introduction of the name started the trend of the cocktail, the story doesn’t end there. As transportation and storage of ice became more possible, the cocktail became more popular. Next, within the US, the age of prohibition had a huge impact on the alcohol culture. Those who we would now refer to as mixologists moved en-mass out of the US to areas where their profession was legal. This resulted in a lack of American cocktail-culture until much later than the rest of the world. In fact, it wasn’t until the world wars when American military forces were introduced to the idea of Polynesian culture, rum, and Tiki style that the cocktail really made its debut.

What’s In A Name

Despite all of this, the beverages we’ve come to think of as cocktails are often, using the original definition, actually not. Most popular drinks are not the true cocktails of The Balance, who only allowed the word to describe a drink with water, sugar, bitters, and alcohol. However, the fun thing about language is how definitions change and adapt. Sure a daiquiri may not technically be a cocktail, but it’s so far removed from anything the inventor of the word could have imagined, there’s no reason to think it couldn’t be.

Categories: Bar | Tags: bar and cocktails
This entry was posted on Friday, September 6th, 2019 at 6:47 pm. Both comments and pings are currently closed.