The Science Behind Beer Head 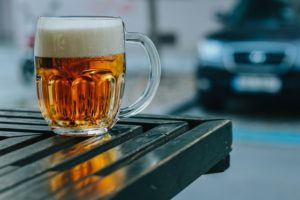 The foamy stuff at the top of your beer is called the head.

The foamy stuff at the top of your beer is called the head. Craft beers are notorious for making great foam heads. A great sign of a quality bartender is if they can create a beer head.

What is a Beer Head?

A beer head is the foam at the top of your beer that puffs up while it is poured. The process of bubbles forming in your drink is called nucleation. Nucleation is caused by carbon dioxide interacting with foam-positive proteins like the Lipid Transfer Protein (LTP1). LTP1 is hydrophobic, meaning it hates water. When your beer is poured, the LTP1 connects with carbon dioxide in the air and in the beer and runs away from the water in your beer. The head that forms are the LTP1 and carbon dioxide bubbles. Craft beers that contain hops will have stronger heads, meaning more stable foam. Hops contain other proteins that are hydrophobic, making the foam more rigid and thick.

Why You Want a Head on Your Beer

A nice head on your beer will make it less carbonated overall. You want this because that means there is less carbon dioxide going into your stomach. When carbonated beverages like sparkling ciders or soda reach your stomach acid, all the carbon dioxide gets released, which causes bloating. The head of a beer also releases a lot of flavors because it draws out the carbon dioxide and fizziness, making flavor profiles more than just “yeasty”. For craft beers, it is hard to taste the rest of the flavor profile if it is poured wrong and there is not enough foam.

How to Get a Great Beer Head

The easiest way to get a nice foam head on your beer is to order a nice craft beer from our bar. However, if you want to do it at home, tilt your beer glass at about 45 degrees so when you start pouring the beer hits the side of the glass. After a few seconds, you can tilt the beer, so it stands normally, and you continue pouring. Your head will come out tasty and perfectly foamy.

State Fare is conveniently located at 748 Frederick Road in Catonsville, Maryland. Our extensive menu has a variety of unique options for breakfast, lunch, and dinner that are sure to please even the pickiest of eaters. We even have many vegetarian, vegan, and gluten-free options! Our fully-stocked bar holds a huge collection of bourbons and whiskeys, as well as several different wines. On tap, we have several different local craft beers to show off the best beer that Maryland has to offer. We’re open every day from 8 am until 2 am, so make your reservation or just stop in and see us today! Follow our blog and Facebook to keep up with all of the latest news!

Categories: Beer | Tags: beer, drinking, and science
This entry was posted on Friday, October 1st, 2021 at 4:14 pm. Both comments and pings are currently closed.