The Origins of S’Mores: From Campfires to State Fare 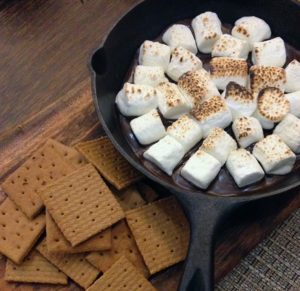 State Fare loves s’mores so much we’ve added our own spin on the classic to our autumn dessert menu.

S’mores may be a new dish on State Fare’s autumn dessert menu, but they’ve been a delicious campfire treat for ninety years and counting. We’ve all probably enjoyed this treat made of marshmallows, graham crackers, and chocolate at some point, but do we know where it originated? S’mores and the marshmallow and graham crackers that make them so good have an interesting and surprising backstory. Read on to learn about how this snack found its way to countless people, including our diners at State Fare!

The Ancient History of Marshmallows

The first marshmallows came from a plant called Althaea officinalis. Ancient civilizations, including the Greeks and Romans, used the root of this plant and its leaves for medicinal purposes, often to soothe inflammation.

However, it was the French who first thought to market marshmallow as a treat, and not just as medicine. The plant became tasty by combining the root juice of the plant with eggs and sugar and beating it into a foam. These French marshmallow creators then formed this paste into a lozenge and called it pǎté de guimauve. Its purpose was to soothe the throat and taste good while doing so. By the 19th century, however, gelatin replaced the actual root juice because it tasted similarly but was much more cost-effective.

The Unusual Origins of Graham Crackers

Just like corn flakes, graham crackers were initially invented to curb sex drives. Sylvester Graham, a Presbyterian minister in early 19th-century New Jersey, felt that humanity was destined to doom because of its obsession with carnal desires. He believed food could be a significant factor in arousing these desires and set out to create a non-stimulating food. This led to his process of baking using only ground, unbleached white flour, wheat bran, and coarsely ground germ. This created a dry cracker that he named after himself: The Graham Cracker.

Early Pairings of Marshmallow and Chocolate

The history of chocolate is much longer and complex than that of marshmallows or graham crackers—anthropologists recently discovered cacao residue on Honduran pottery that could date back to 1400 B.C.E.— so we’ll skip ahead to when people decided marshmallow paired great with chocolate.

During the Victorian Era in the nineteenth century, funeral cakes that were prepared upon the death of a loved one often included chocolate and marshmallow.

During the 1890s, resort towns in the Northeast saw a trend in roasting marshmallows. This trend was considered fashionable because it encouraged a little bit of socialization and flirtation as people could share their marshmallows.

The Arrival of the S’More

Finally, in 1927, the recipe for a s’more, then known as a “Some More,” arrived in a Girl Scout guidebook titled “Tramping and Trailing with the Girl Scouts.” The recipe was later credited to troop leader Loretta Scott Crew and called for 16 graham crackers, eight bars of chocolate, and 16 marshmallows. It instructed the s’more-maker to toast the marshmallow until it is in a “crispy, gooey state.” Then place the marshmallow on top of a chocolate bar and in-between two graham crackers, and now you’ve got “some more.”

It’s unclear when people officially started calling the treat “s’more,” as it was called “some more” in Girl Scout publications through at least 1971.

Our autumn dessert menu is full of warm, toasty treats, so we had to include the s’more. It’s not just for summer anymore! State Fare puts our spin on the classic treat by creating it from homemade chocolate pudding, torched marshmallow fluff, and almond shortbread. It’s only eight dollars, and a great comfort food dish to enjoy when you’re missing those cozy campfire nights.

Categories: Restaurant | Tags: dessert menu, desserts, and s'mores
This entry was posted on Friday, November 1st, 2019 at 4:25 pm. Both comments and pings are currently closed.