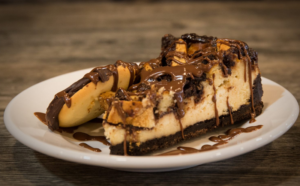 The nearly 185-year-old Berger Cookie of Baltimore is a local legend with fans all over the world. If you have somehow not tried this delectable sweet yet, it’s simply a shortbread cookie covered with rich chocolate fudge. We certainly love Berger cookies at State Fare, which is why we have used the cookie as one of the main ingredients in our autumn dessert menu showstopper: the Berger Cookie Cheesecake. The vanilla bean cheesecake has a dark chocolate crust and is topped with chocolate sauce and chopped Berger cookies, all for just eight dollars.

What makes Berger cookies so beloved? Besides their oh-so-sweet flavor, the cookies have been a Baltimore family institution since their arrival here in the 1830s. Read on to learn more about how these cookies came to Maryland how they have remained popular to this very day.

The Many Berger Brothers

The Berger Cookie recipe came to American from Germany by brothers George and Henry Berger in 1835. Henry owned a bakery in East Baltimore, which he passed on to his son, also named Henry. Young Henry’s brothers George and Otto opened their bakery until 1900 when Otto died, and George and Henry combined forces to create “Bergers” bakery. Eventually, Henry died, which left George the sole Berger brother and bakery proprietor.

The Russells and the DeBaufres

When George Berger retired, he sold the bakery and the cookie recipe to Charles E. Russell. The bakery was run by Russell, his son Charles, and then Charles’ sons Charles III and Dennis.

DeBaufre Bakeries Inc. was soon able to earn enough of a profit that the brothers could purchase Bergers from the Russell family in 1969. Charles DeBaufre’s son, Charles Jr., purchased part of the business in 1978 and shared a partnership with his uncle Benjamin and John Koehler upon Charles Sr.’s death in 1988. When Benjamin retired in 1994, Charles Jr. became the sole proprietor of Berger Cookies and is running the business to this day.

The famous cookie is a buttery vanilla wafer topped with dark, creamy chocolate fudge. According to Charles DeBaufre Jr., the cookie weighs in at about 1.25 ounces, with the wafer alone only weighing a quarter of an ounce. That whole remaining ounce of the cookie is all chocolate!

Even after all these years, the cookie is handmade and produced from one place, a small Cherry Hill factory. As recently as 2012, the Berger cookies made up 98% of annual sales for DeBaufre Bakeries.

Also, in 2012, Debaufre Bakeries had a limited run of three flavors for the cookie: strawberry, lemon, and rum, which they had previously made in 1972. However, sales soon picked up, and they returned to the classic Berger flavor.

In 2011, the cookie won both the “Best of Baltimore” and the “Best Cookie” awards from Baltimore City Paper and was featured on the Food Network program The Best Thing I Ever Ate.

As Baltimoreans ourselves, State Fare had to find a way to eat more Berger cookies. So we crushed them up and added them to some velvety cheesecake! Try our new Berger Cookie Cheesecake on your next visit and remember why this cookie is so dang delicious.

Categories: Restaurant | Tags: Baltimore, berger cookies, and dessert
This entry was posted on Friday, October 25th, 2019 at 4:05 pm. Both comments and pings are currently closed.