Why Craft Beer is the Better Beer 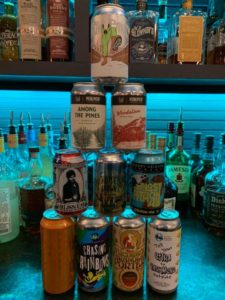 Learn why exactly craft beer tastes so delicious and what brews you can pick up at State Fare!

If you’ve heard the term “craft beer” tossed around and wondered what exactly makes it “craft,” it is a beer that is made in a traditional or non-mechanized way by small breweries. Compared to the mass-produced beer that can be found in any liquor store and during any Super Bowl commercial break, craft beer is made with extreme care, attention, and creativity, which often makes it extra delicious. At State Fare, we carry a variety of Maryland craft beers from local brewers, including Burley Oak, Peabody Heights, Black Flag, Heavy Seas, and Monument City, among many others. We believe that craft beer offers unique flavors and experiences that can’t often be found in the mass-produced varieties. Read on to learn just what craft beer can offer, and why you should try some local varieties at your next visit to State Fare.

While most mass-produced beers tend to look the same, craft beer comes in a variety of colors based on each specific brew and often produces a head that provides a crisp look in the glass and leaves a lasting taste.

Craft beers focus on a specific flavor palate that varies with each batch from each brewery. While mass-produced beer is often served as cold as possible, craft beers tend to be served between 50 and 55 degrees Fahrenheit, so the flavors become more noticeable.

Mass-produced beer is often made from cheap ingredients to reduce the final cost of the beer. However, craft beers are always made with specific, hand-selected ingredients and are produced in smaller batches by brewers who genuinely have a passion for creating and enjoying beer.

Because craft beer is brewed specifically with flavors in mind, it is pretty challenging to find two craft beers that are exactly alike. Many breweries even create specific flavors for each season, so specific varieties may only be available during limited times of the year.

Because craft brews are made locally, and in relatively small breweries, you can easily visit the site of your favorite brewery and meet the makers behind your beers. They may even offer brewery tours or samples!

The heightened, complex flavors of craft beer make experimenting with food pairings an exciting endeavor. The mass-produced beers tend to taste the same regardless of what you’re eating them with, but your favorite craft brew can easily add a punch of flavor to that specific dish.