The History of Pickles 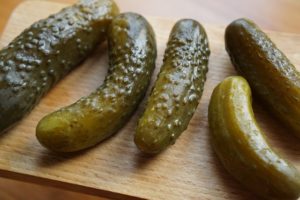 Are they a snack? A garnish? Or just something to add that extra layer of flavor to a burger? Learn more about pickles!

Until recently, pickles had a pretty limited reputation: a common pregnancy craving and even more common American food accessory.  Most often seen as a plate garnish or sandwich topping, pickles are an old stand-by in the restaurant industry. Increasingly, however, they are gaining (renewed) popularity as a stand-alone snack and new use as a flavor option on their own – pickle milkshake, anyone? So it may surprise people that pickles actually have a long and interesting history. Whether you love them or hate them, you can’t escape them, so read on for some interesting facts to share with friends.

When most people use the word “pickle” they are referring to pickled cucumbers, but it is actually a catch-all term that can apply to any vegetable (and even some non-vegetable items).  This is because the word actually refers to the process of making them. To pickle something is to soak it in a brine, usually a salt solution, to preserve it. There are many different vegetables that are pickled, including olives, peppers, onions, radish, ginger, carrots, and, of course, cucumbers. There are also many different flavors of brine, including the traditional salt, vinegar, and dill brine of dill pickles and sugar brines that result in sweet pickles.

Where Did They Come From?

The history of pickles stretches all the way back to 2030 BC. Cucumbers are native to India, and back then people would pickle them so they could have a preserved food source over the long, cold, crop-less winter months. Pickling the vegetable offered an easy food source that also contained vitamins and minerals (which is likely why they are often a pregnancy craving as well). This snack proved to also be easily portable, and people who were traveling would often take pickles with them.

While pickles are ubiquitous in American-style food, they didn’t reach our shores until the late 1800s to early 1900s. European Jews, many of whom settled in New York, brought the tasty snack with them. In New York,  pickles became popular in Jewish communities and quickly spread from there. While still a common accompaniment to any sandwich around the country, from the restaurant to the deli (Jewish or otherwise), you can also find jars of pickles lining the shelves of every grocery store. Today, pickling has found a resurgence as a home hobby, and pickles themselves are showing up on menus in their own right.

Categories: Restaurant | Tags: food, pickles, and restaurant
This entry was posted on Friday, July 19th, 2019 at 4:32 pm. Both comments and pings are currently closed.