3 Historical Facts About Bourbon in America 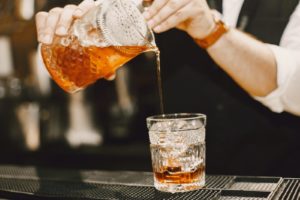 State Fare has an extensive selection of high-quality bourbons homegrown in America.

State Fare has an extensive selection of high-quality bourbons homegrown in America. As one of the nation’s most popular pours in any restaurant or bar, bourbon is a smooth spirit fermented from mashed grain varieties that each have their own unique flavor profiles. Whether you’re drinking bourbon neat or on the rocks, this classic Americana drink is always aged in a brand-new, charred white oak barrel that contributes to its drinkability. So next time you order another round of bourbon at State Fare, keep these historical facts swirling around your mind while you drink up.

The United States Congress declared bourbon to be “America’s Native Spirit” due to its Kentucky origins in 1964. Considering that most bourbon is native to Kentucky, it’s no surprise that there are more production barrels located in Kentucky than there are people! For every one person that lives in Kentucky, two barrels of bourbon are in storage. At State Fare, some of our favorite bourbons from Kentucky include Yellowstone Select Bourbon ($45 a pour), Old Forester Birthday Bourbon ($45 a pour), and Rebel Yell Bourbon ($10 a pour).

There Are Extensive Rules and Laws

There are extensive rules and laws surrounding the production of bourbon. To be considered bourbon, it must be produced in America and made from 51% corn. Additionally, it must be aged in a charred, brand-new white oak barrel that’s never been used. After the use of a barrel for production, the barrel can solely be used for aging scotch. The charred, white-oak barrels used for aging bourbon can release flavor profiles that consist of vanilla, caramel, smoke, and even more.

Former President Thomas Jefferson provided farmers with over 60 acres of land to produce native crops, including corn used for bourbon production. This land was referred to as “Bourbon County” by Jefferson in historical records. As one of the most beloved spirits, even former President Truman is stated to have always started his day off with a shot of bourbon alongside his breakfast. Feeling presidential? Order a shot of bourbon with your breakfast next time you pop into State Fare!

State Fare is conveniently located at 748 Frederick Road in Catonsville, Maryland. Our extensive menu has a variety of unique options for breakfast, lunch, and dinner that are sure to please even the pickiest of eaters. We even have many vegetarian, vegan, and gluten-free options! Our fully-stocked bar holds a huge collection of bourbons and whiskeys, as well as several different wines. On tap, we have several different local craft beers to show off the best beer that Maryland has to offer. We’re open every day from 8 am until 2 am, so make your reservation or just stop in and see us today! Follow our blog and Facebook to keep up with all of the latest news!

Categories: Bourbon | Tags: bourbon, bourbon production, and drinking bourbon
This entry was posted on Friday, June 11th, 2021 at 9:24 am. Both comments and pings are currently closed.